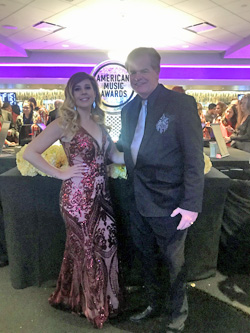 Randy and his companion Beth at the
American Music Awards in the
Microsoft Theatre, Los Angeles CA

Or the best concert or show in your area
Ticketmaster

in providing entertainment to aid the homeless. Your donation helps provide health care and homeless care facilities for those in need. Please consider a tax deductible donation to Comic Relief by dialing 1.800.528.1000..... Your pledge can make a big difference.

Randy "On The Road" ~ Picture Gallery

To obtain information on Randy Riggle, please write or call us at:

All information and cat logos authored on these pages are "Copyright" to Randy Riggle and Riggle Productions 1997-2023 All Rights Reserved Worldwide." Comic Relief logo used by permission of Comic Relief.